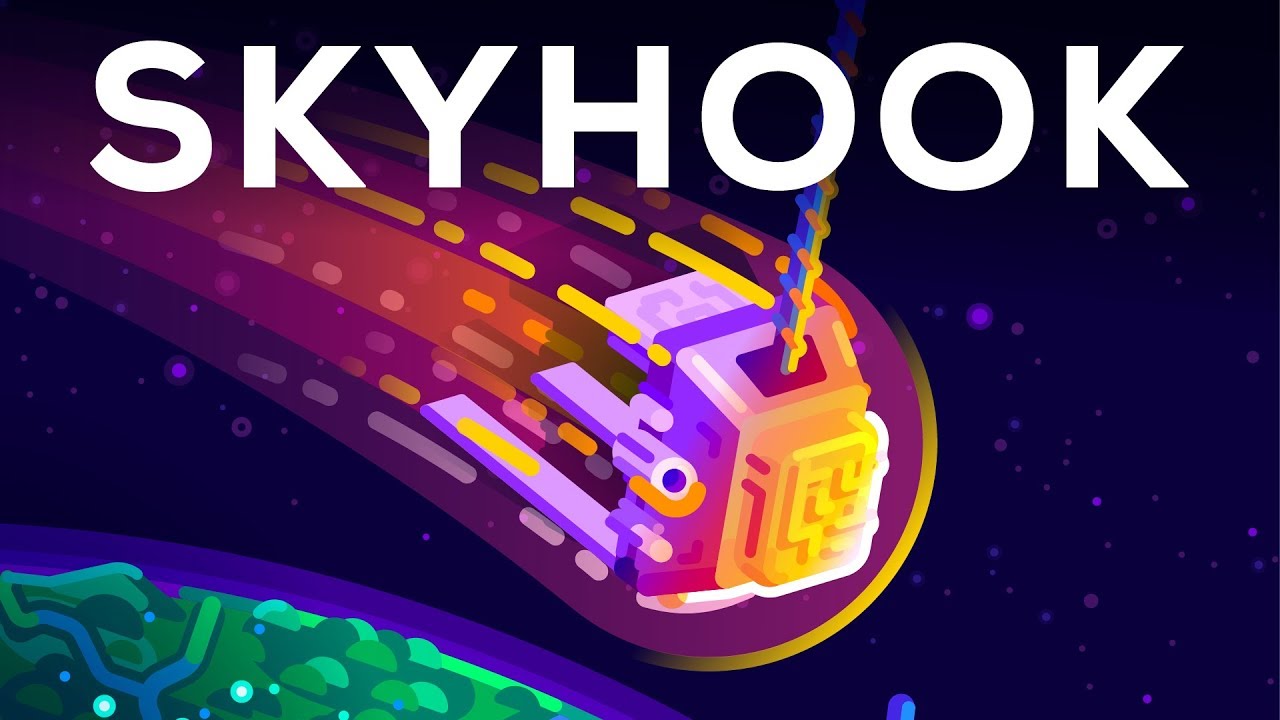 This can be appreciated by a simple 'thought experiment'. Consider a cable which is just strong enough to hang vertically for a hundred kilometres. One more centimetre, and it will snap Now cut it in two. Obviously, the upper 50 km can support a length of 50 km -- the identical lower half.


So if we put the two sections side by side, they can support a total length of km. Therefore, we can now span a vertical distance of km, using material with only km breaking length. Clearly, we can repeat the process indefinitely, bundling more and more cables together as we go upwards. I'm sure that by now you've recognised an old friend -- the 'step' principle, but in reverse. Step rockets get smaller as we go higher; step cables get bigger. I apologise if, for many of you, I'm labouring the obvious, but the point is of fundamental importance and the rocket analogy so intriguing that I'd like to take it a little further.

We fossils from the pre-space age -- the Early Paleoastronautic Era -- must all remember the depressing calculations we used to make, comparing rocket exhaust velocities with the The best propellants we knew then -- and they are still the best today!

From this, some foolish critics argued that leaving the Earth by chemicalrocket was impossible even in theory[13]. The answer, of course, was the step or multi-stagerocket -- buteven this didn't convince some sceptics. Willy Ley [14] records a debate between Oberth and a leading German engineer, who simply wouldn't believe that rockets could be built with a mass-ratio of twenty. For Saturn V, incidentally, the figure is about five hundred.

We escaped from earth using propellants whose exhaust velocitywas only a fraction of escape velocity, by paying the heavy price demanded by multi stage rockets. An enormous initial mass wasrequired for a small final payload.

In the same way, we can achieve the km 'escape length', even with materials whose breaking length is a fraction of this, bysteadily thickening the cable as we go upwards. Ideally, this should be done not in discrete steps, but by a continuous taper. The cable should flare outwards with increasing altitude, its cross-section at any level being just adequate to support theweight hanging below. With a stepped, or tapered, cable it would be theoretically possible to construct the space elevator from any material, however weak. You could build it of chewing gum, though the total mass required would probably be larger than that of the entire universe.

For the scheme to be practical we need materials with a breaking length a very substantial fraction of escape length. Even Kevlar 29's km is a mere 25th of the km goal; touse that would be like fuelling the Apollo mission with damp gunpowder, and would require the same sort of astronomical ratio. So, just as we were once always seeking exotic propellents, wemust now search for super-strength materials.

And, oddly enough, we will find them in the same place on the periodic table. Carbon crystals have now been produced in the laboratory withbreaking lengths of up to km -- that is, more than half of escape length. Whether this material can ever be produced in the megaton quantities needed is a question that only future technologies can answer; Pearson [8] has made the interesting suggestion that thezero gravity and vacuum conditions of an orbiting factory may assist their manufacture, while Sheffield [15] and I [10] havepointed out that essentially unlimited quantities of carbon are available on many of the asteroids.

Thus when space mining is infull swing, it will not be necessary to use super-shuttles to lift vast quantities of building material up to geostationary orbit -- a mission which, surprisingly, is somewhat more difficult than escaping from Earth. It is theoretically possible that materials stronger -- indeed,vastly stronger -- than graphite crystals can exist.

Sheffield[15] has made the point that only the outer electrons of theatoms contribute, through their chemical bonds, to the strength of a solid. The nucleus provides almost all the mass, but nothingelse; and in this case, mass is just what we don't need. So if we want high-strength materials, we should look at elements with low atomic weights -- which is why carbon A. It follows, therefore, that the best material for building space elevators is -- solid hydrogen!

Infact, Sheffield calculates that the breaking length of a solidhydrogen crystal is km -- almost twice 'escape length'. By a curious coincidence, I have just received a press release from the National Science Foundation headed 'New form of hydrogen created as Scientists edge closer to creating metallic hydrogen'[16]. It reports that, at a pressure of half a million atmospheres, hydrogen has been converted into a dense crystalline solid at room temperature. The scientists concerned go on to speculate that, with further research -- and I quote -- "hydrogen solids can be maintained for long periods without containment".

This is heady stuff, but I wonder what they mean by 'long periods'. The report adds casually that 'solid hydrogen is 25 to 35 times more explosive than TNT'. So even if we could make structures from solid hydrogen, they might add a new dimension to the phrase 'catastrophic failure'. However, if you think that crystallitic hydrogen is a tricky building material, consider the next item on Dr. Sheffield's shopping list. The ultimate in theoretical strength could be obtained by getting rid of the useless dead mass of the nucleus, and keeping only the bonding electrons. Such a material has indeed been created in the laboratory; it's 'positronium' -- the atom, for want of a better word, consisting of electron-positron pairs.

Sheffield calculates that the breaking length of a positronium cable would be a fantastic 16,, km! Even in the enormous gravity field of Jupiter, a space elevator need have no appreciable taper. Positronium occurs in two varieties, both unfortunately rather unstable. Para-positronium decays into radiation in one-tenth of a nanosecond -- but orthopositronium lasts a thousand times longer, a whole tenth of a microsecond. So when you go shopping for positronium, make sure that you buy the brand marked 'Ortho'.

Sheffield wonders wistfully if we could stabilise positronium, and some even more exotic speculations are made by Moravec [17].

Coming back to earth -- or at least to this century -- it seems fair to conclude that a small cable could certainly be established from geostationary orbit down to sea level, using materials that may be available in the near future. But that, ofcourse would be only the first part of the problem -- a mere demonstration of principle. To get from a simple cable to a working elevator system might be even more difficult. I would now like to glance at some of the obstacles, and suggest a few solutions; perhaps the following remarks may stimulate others better qualified to tackle them.

The space elevator may be regarded as a kind of bridge, and many bridges begin with the establishment of a light initial cable -- sometimes, indeed, no more than a string towed across a canyon by a kite. It seems likely that the space elevator will start in the same way with the laying of a cable between geo stationary orbit and the point on the equator immediately below.

This operation is not as simple as it sounds, because of the varying forces and velocities involved, not to mention the matter of air resistance after atmospheric entry. But there are two existing technologies which may provide a few answers, or at least hints at them. The first is that of submarine cable laying, now considerably more than a century old.

Perhaps one day we may see in space something analogous to the triumphs and disasters of the Great Eastern, which laid the first successful transatlantic telegraph cable -- the Apollo Project of its age. But a much closer parallel, both in time and sophistication, lies in the development of wire-guided missiles. These lethal insects can spin out their metallic gossamer at several hundred kilometres an hour. They may provide the prototype of the vehicle that lays a thread from stationary orbit down to earth.

Imagine a spool, or bobbin, carrying some km of filament, a few tenths of a millimetre thick at the outer layers, and tapering down to a tenth of this at the core -- the end that finally reaches Earth. Its mass would be a few tons, and the problem would be to play it out evenly at an average velocity of a kilometre a second along the desired trajectory.

Moreover, an equivalent mass has to be sent outwards at the same time, to ensure that the system remains in balance at the stationary orbit. My friend Professor Ruppehas investigated [12] the dynamics of the mission, and concludes that it can be achieved with modest mass-ratios. But the mechanical difficulties would obviously be formidable, and it may well turn out that material of such tensile strength is too stiff to be wound on to a spool of reasonable radius.


Sheffield [18] has suggested an alternative method of installation which I find -- to say the least -- hair raisingly implausible. He proposes constructing the entire space elevator system in orbit, and then launching it towards the earth, grabbing the lower end when it reaches the equator! The atmospheric entry of a few megatons dead weight, which must impact within metres of the aiming point, seems likely to generate a lot of opposition from the environmentalists.

I call it 'harpooning the Earth', and would prefer not to be near one of the Poles if it's ever tried out.